The film begins with a woman(probably a grandma) telling another woman (granddaughter) a tale about a prince searching for a virgin woman to get rid of the fear of blood. The prince says to the woman, “I want every inch of you”. The woman replies, “But I don’t own myself”. The film ends with the grandma saying, “Then, the virgin asked the earth who do I belong to?”

Like Sanal’s previous films Ozhivudivasathe Kali and Sexy Durga, Chola explores the oppression of women in a patriarchal sphere. Most movies dealing with oppression tend to become a morality lecture. However, Chola neither traces the black nor the white. It traces the grey. The result is a two-hour-long movie that makes you uncomfortable like hell (and that is the beauty of it)!

The story revolves around Janaki who elopes with her boyfriend to spend a day together. She is uncomfortable with the presence of ‘aasan'(boss), who is driving the jeep and initially helping them to elope. However, the boyfriend consoles her by saying that it is his boss. What follows is the dark and twisted journey of these three characters.

Screenshot from the movie ‘Chola’

Much of the movie deals with agency. Janaki has no agency of her own. The title Chola means the shadow of water and, Janaki is like a shadow who obeys everything. The director says in an interview, “Chola is about water. We have the international title as Shadow of Water. Chola is actually very soothing. Chola in Malayalam means shadow, wetland and waterfall, so it has a lot of meanings. At first, you feel that the word itself is very cool. And in the title, you can read Chola as Chora also. It is blood” (Sasidharan)

Screenshots from the movie ‘Chola’

On studying the hierarchy of the characters in the film, we see the wimpy and animated boyfriend at the lowest level. Her boyfriend has no name-He is nothing. Even though the boss has no name, he is called something (“BOSS”) that indicates the power of his position. This hierarchy is represented in the posters of the film too. 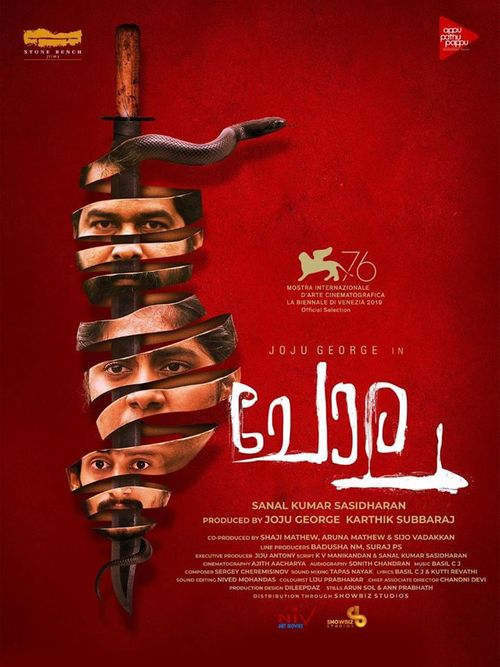 poster of the film ‘chola’

The movie also explores two different environments-the forests and the city. Janaki, who was initially uncomfortable, later smiles for a brief moment and looks at the shiny shopping malls and the streets in wonder. This is what she hoped for! Each environment brings out the different selves of the characters. In the city, Janki and her boyfriend are helpless. However, in the forest, we see that the boyfriend and Janaki garner the courage to kill.  We see Janaki exercising her agency, and her decisions and choices go against our morality. She has suffered abuse and oppression that leads to a great deal of trauma. While talking about the Suryanelli case in an interview, the director says, “In the Suryanelli case, people were asking why the girl was not protesting against the rape. Society took it as though she had enjoyed the whole thing. But for me, it is not like that. The girl is a child. You are imposing a trauma. You are hitting her hard, and she can change. I have seen it. I was a lawyer. I have seen so many cases like this. People suddenly behave abnormally and you can’t predict why they are behaving like this. There was a girl living near my house and she was working somewhere, and something happened there, a love failure or something. She totally forgot her father, mother, and she was saying that she didn’t belong to that place. So it is all your mental perception, which can change” (Sasidharan).

Sanal uses nature brilliantly. He manages to create suspense simply with the headlights of the jeep in the dark forest. Nature plays a crucial role in the film-It is where the chaos begins and it is nature that(tries to) heal. The aerial shots of the winding roads that look like a coiled snake add to the themes that the movie explores. Shots of mist(during the first half of the film) and the forest(towards the end of the film) are an absolute treat to the eyes! Credit goes to Ajith Acharya for creating the eeriness with his excellent cinematography.

Screenshots from the movie ‘Chola’

The casting is perfect! Akhil Viswanath as Janaki’s lover and Joju George as the Boss are excellent but it is Nimisha Sajayan as Janaki who steals the show! Words fail to describe her performance. In one scene, when she gets physically abused, we do not see any visuals of her. We only hear her screams but, those screams are so horrifying that they can steal the sleep of your nights. This scene is also an example of excellent cinematography. We see nothing but the empty city lanes where nobody but silences witness her pain.

Screenshot from the movie ‘Chola’

In Chola, we do not get any backstories of the characters and much of the things remain unsaid which works brilliantly for the film. It is difficult for us to reduce the scenes to bland summaries.

Chola deeply affected me because it made me question my own thought process. I was constantly questioning throughout the latter half of the movie-Why is the girl not killing the man who abused her! It made me realise that most of the people who face something outside the known grammar tend to reject it. They don’t even try to understand. I was also immensely impressed by the making of the movie. The way this movie captured the grandeur of nature is remarkable. I can’t remember any Indian movie in the recent past that had this level of brilliant scene of nature. Chola is a movie that challenges the way in which psychological abuse and violence is shown in cinema. It is deeply unsettling and is one of the finest movies in recent times. I cannot get it out of my system! The movie is available on Amazon Prime Video. 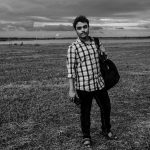 A resident of Kolkata, West Bengal, Ayan Dawn did B.A (Hons.) in English from Ramakrishna Mission Vidyamandira, Belurmath (Calcutta University) and currently pursuing M.A in English language and literature from University of Delhi. He has worked as a writer in the National Geographic Photo Camp and has also featured as a citizen journalist in The Quint.
PrevPreviousPOSTCARDS
NextEntropyNext

You can find out more about which cookies we are using or switch them off in settings.