The widespread global political mayhem marked by bigotry and half-witted extremism works in tandem with the overt proliferation of images. In their affect-driven reception, the efficacy of social-political critique in images of public propagation should be rethought, especially in political cartoons and caricatures. Caricatures are known for their play between distortion and recognition, violence and humour, entertaining mockery and thoughtful inquisition. To understand the political-aesthetics of caricatures and their fluidity in containing critical political positions, it would be interesting to revisit Gaganendranath Tagore’s short but prolific stint in caricature drawings. I would attempt to reflect on the interaction between caricature as a form and Gaganendranath’s political project in the context of the nationalist movement.

Gaganendranath’s involvement with caricatures can be located almost exactly in the middle life of his painterly oeuvre. Portrait studies with pencil and ink along with soft-colour landscapes primarily comprise his early artistic endeavour. This period, lasting till 1912, documents sketches of his sister, Sunayani Devi, Japanese art critic, Okakura, Ananda Coomaraswamy, and famous kirtan singers of Jorasanko. The illustrations published in Rabindranath Tagore’s autobiography, Jeevansmriti (1912) records his engagement with Japanese brush techniques and minimal, impressionist use of colours; his tryst with Sumi-e school of Japanese painting is quite evident here. A similar style is also employed in his set of Chaitanya paintings, painted around 1912-1914, where he depicts different episodes from Chaitanya’s life. However, from 1915 to 1921, he suddenly developed a keen interest in caricature drawing, after which from 1922 onwards he shifted to Cubist and post-Cubist forms. I am particularly interested in this ‘interim’ period where he articulated strong discontent towards bourgeois nationalists, colonial apologists, and the caste system through his caricatures. His active participation in the theatre activities of Bichitra club is often considered as the chief inspiration for his interest in comedy, satire, and social criticism. But this period is also relegated to the margins because his productions are considered as artistic whims that fall outside the rubric of serious art history. Rather it is important to consider his political stand vis-à-vis his particular interest in the form of pictorial caricature. The first volumes of caricatures, Virupa Vajra (Strange Thunderbolts) and Adbhut Lok (Realm of the Absurd) were published in 1917. Reading these volumes in Gaganendranath’s political context will foreground the tensions and critical ambivalence in his political participation.

Adbhut Lok directs laughter and scorn at the hybrid identity of anglicised Indians who adopt a colonial culture in the hope for political gains. In the elaborately titled piece, ‘By the sweat of my brow, I tried to be mistaken for a sahib but still, that man called me baboo’ we see a member of the urban elite profusely sweating because of his failure to adopt the Western garb. He has removed his hat to wipe his head and his bag is left behind. He is sweating not merely because of his inappropriate dress in the sultry weather, but also due to the embarrassment and frustration, he feels in his failure to be recognized as a ‘sahib’.

Gaganendranath Tagore 'By the Sweat of My Brow' from the album The Realm of the Absurd, by, ink on paper, Kolkata, 1917

The critique in this image is not unequivocally directed at everyone–across different social categories–who were working for the British administration. A large section of the population worked for the colonial state as army men, guards, and in other lower-rank jobs because of their poor social circumstances. Caste hegemony in India rendered this section completely exploited, as a result of which they found greater social mobility with the approach of colonial modernity. Gaganendranath was particularly against the urban, gentry class who desperately mimicked the colonial masters to evoke their lost political hegemony. Because of their socio-political capital, this class had the privilege of choice to be Anglicised or to resist it. Therefore, his object of critique – the babus were always depicted with a bulbous figure, indicative of surplus value and accumulation. As opposed to the proper fit, creaseless clothes of the station guard in the background, the trousers of the protagonist appear incongruent and full of uneven folds. Pictorial caricature fundamentally involves an exaggeration of the typical features that can downgrade the depicted character. However, unlike racially discriminant caricatures, Gaganendranath’s object of critique did not belong to a fixed identity. He was more interested in the bearings of a certain class and their ill-fated consequences. In the above-mentioned drawing, the protagonist’s incompatibility and failure are aesthetically manifested in the folds of the protagonist’s trousers and his excessive sweating.

Similar details are also observed in another piece titled, ‘Metamorphosis- Don’t disturb me now, I am about to become a saheb.’ In this drawing, an elite Bengali passenger with a cigar tucked in his mouth is trying to wear trousers on top of his dhoti. He epitomizes the schizophrenic subject who failingly tries to become like the master without being able to discard his inherent subjecthood. His forced attempt to wear trousers on top of his dhoti again amounts to the irregular folds. The clothes in his suitcase are in a mess, one of his socks is lost, and the coachman is looking at him grimacingly; the entire situation reflects his failure.

Gaganendranath Tagore, Metamorphosis – Don’t Disturb Me now, I Am about to Become a Sab, lithograph, from The Realm of the Absurd, 1917. © Victoria and Albert Museum, London.

The cover drawing of Adbhut Lok titled, ‘Offending Shadow’ illustrates a similar predicament. Offended by his reflection, the character breaks the mirror. The unstable psychological terrain of this schizophrenic native prototype appears as his highly distorted shadow. These characters perennially suffer because of their inadeptness in completely donning the colonial cloak. But practices of pictorial caricatures mocking the anglicized Bengali elite was nothing new in his times. Kalighat scroll paintings and underground Battala publications also did the same. On the other hand, magazines like Basantak mocked the mannerisms of Western culture by resorting to vile conservatism and nostalgia. The founders of this magazine, Prannath Dutta and Girindrakumar Dutta had strict notions of traditional purity and customs. They abhorrently lamented the threat to the caste system due to the increasing Westernisation of the urban elite. Similarly, Bhawanicharam Bandyopdhyay’s caricature publications lamented the loss of conservative morals in Indian women due to the arrival of Western values.

Gaganendranth’s work, however, steered clear from such tendencies. He was equally critical of the Brahminical elite that dictated over Indian socio-economic capital by resorting to religious sources. ‘The Brahmin of Kaliyuga’, for example, portrays a monstrous, swollen figure of a Brahmin having his meal. This figure accommodates Brahminical vices in a synecdochal form. The lack of labour and assumed self-importance have led this character to profound gluttony, sloth, and debauchery. His body is wrapped in layers of loose fat and his mouth is grossly slavering with flies hovering around. The overall filthiness in his presence upends the notion of Brahminical purity. Reminiscent of the Hindu deity, Vishnu, he also possesses four hands that are engaged in holding alcohol, sweets, a dead chicken, and a prostitute enjoying her hookah. 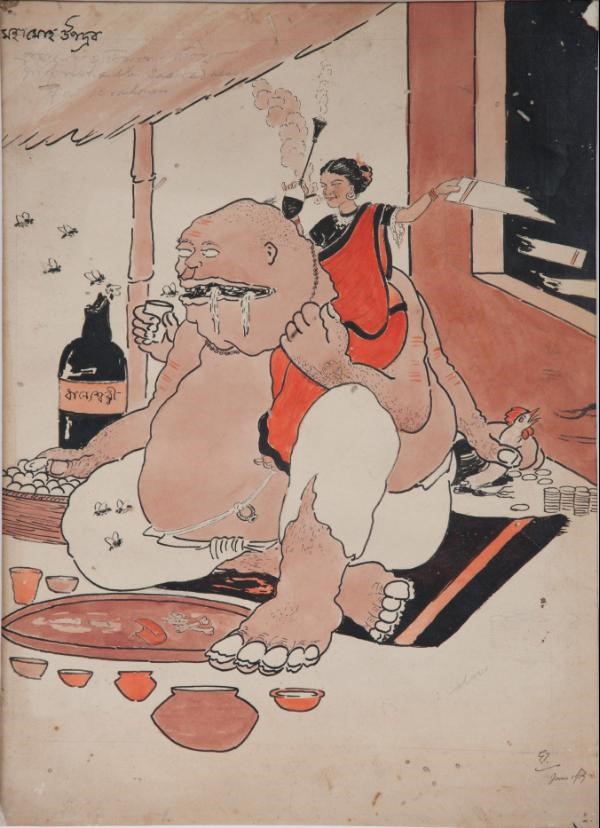 Gaganendranath Tagore, 'Brahmin of Kaliyug', The Realm of the Absurd, by, ink on paper, Kolkata, 1917

Gaganendranath takes a jibe at the religious foundation of the caste system by including this iconological reference. The ill-acquired wealth and faux superiority are manifested in the caricatural portrayal of their huge, perversely shaped bellies. Similarly, in ‘Purification by Muddy Water’, mounds of ill-earned fat make him physically elevated rather than any sacred source. Their caste signifiers – the sacred thread and tilak prominently feature to reinstate the object-identity of ridicule.

In caricatures, the exaggeration of typical features for the purpose of mocking and humour can only work if they remain confined to certain limits. In abstract art or forms like cubism, to which Gaganendranath later shifted, distortion of features can work to the extent of annihilating the original identity of the character. In caricatures, however, certain facets of identity are selectively retained to distinctly highlight the target object. This technique of scrutinizing the limits of caricatural distortion translates to an exercise in generating critical space. Similarly, Gaganendranath’s politics stood at the limits of popular tendencies; he was equally critical of colonial mimicry and the romantic celebration of existing Indian practices. The aesthetic rationale of caricatures, therefore, aptly corresponded to his critically informed political ambivalence. In the current epoch, the political potency of caricatures can be precisely situated in this aesthetic tension that enables impassive critical response without losing their affective charge.

Santasil Mallik
Santasil Mallik is a visual artist and independent author based in Kolkata, India. He is currently pursuing his research on Literary Visualities from Jawaharlal Nehru University, Delhi. He is very passionate about various art forms. His recent short documentary Farrago (2019) was screened at several film festivals in Italy, Greece, Vietnam, Columbia.
8+
Close Menu

Find out more or adjust your settings.