There is nothing more beautiful and liberating than indulging in your (one’s) own pandemonium, nothing more reassuring of one’s existence, both spiritually and physically, and this belief of mine gave birth to this particular series.

I find myself searching inside my bewildering and whirligig mindscape, questioning the objective reality every now and then. I am always apprehensive of my surroundings including the people around me, even my loved ones. I feel restless. I am lost, yet I don’t want to be found. I am seeking refuge within myself. I am exploring the known, the unknown and the unknowable. I am wandering into wonder. 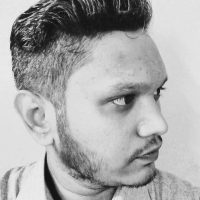 Mushfiqur Rahman was born in 1990. He is a documentary photographer based in Bangladesh. He has studied at Pathshala South Asian Media Institute (2015-2017).

His journey towards photography started way back in 2011, with a budget point and shoot camera and with time he managed to explore different formats. In 2012 he had to drop out of his university where he was studying architecture but somehow managed to embrace photography, since then photography shaped his life for good. He is more of a spontaneous photographer, who observes and captures whatever fascinates him, no holds barred. So far some of his projects have been digitally published online. Here he is sharing images from a work titled “Wanderer”.

You can find out more about which cookies we are using or switch them off in settings.